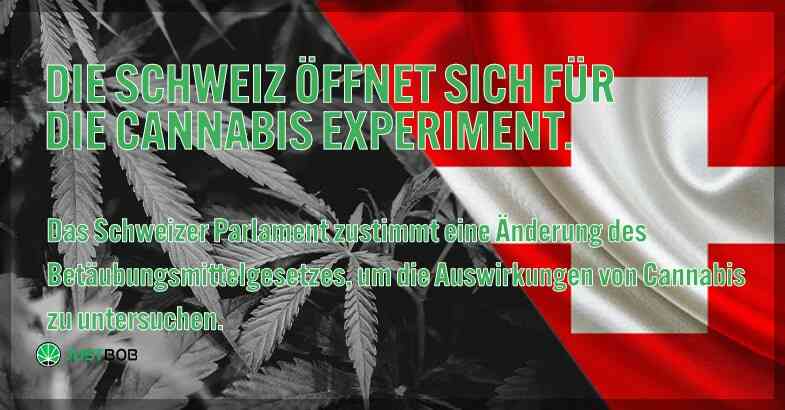 The Swiss Parliament approves an amendment to the narcotics law to study the effects of cannabis.

In fact, after the approval of a change in the narcotics law by the Parliament, the confirmation of the States came as well, which gave their approval with 31 votes in favor, 7 against and 2 abstentions.

The revision of the LStup (Law on Narcotic Drugs) with the new Article 8a will make it possible, from 15 May 2021, to legally carry out scientific experiments on the use of hemp.

We at Justbob’s blog, which has been active in the CBD cannabis market for years, are keen to keep our readers informed of all news concerning the world of CBD flowers and hemp in general.

So, let’s find out how this study will take place.

Read also: Is it legal to grow hemp?

The modalities of the hemp pilot trial.

First, who can participate in this experimental phase?

What we learn from the text is that the project will be open to people of legal age who are already marijuana users. By submitting a regular application to the FOPH (Federal Office of Public Health), they will be able to buy various hemp products legally, and therefore without any criminal risk, and of course on a limited basis.

These include, as we know, hashish, marijuana, cbd oil and others, but it is not yet known which of these will be distributed by authorized dealers as part of this trial. What is certain is that they will be subjected to very strict quality controls.

In fact, the entire production chain will be subject to strict monitoring and control, not only to ensure a product that meets adequate quality standards (including the requirement that it be organic), but also with the aim of cutting out the black market.

The sales outlets authorized to distribute the products included in the trial will also be provided with thorough training, so that the operators are able to provide consumers with all the information and make them aware of the risks associated with consumption.

It goes without saying that resale and consumption in public places will be banned, and the provisions issued to protect young people include a total ban on advertising.

It should also be added that the health status of consumers undergoing the trial will be constantly monitored throughout the duration of the trial.

The objectives of the hemp trial.

Now that we know how this trial is going to be carried out, let us find out what it aims to achieve.

The main aim of this 10-year trial by its promoters is to gain as much information as possible about the health effects of cannabis on users.

This will be possible not only thanks to a careful screening of those who will take part in the project, but also to the fact that the product and its derivatives, as mentioned above, will respect certain criteria both in terms of quality and main characteristics.

For example, the levels of certain components of the cannabis being studied, above all THC and CBD, will have to comply with precise parameters.

The other stated aim is to combat the black market, which, given the large number of regular users of marijuana and hemp products, thrives on poor quality products that are not subject to any controls.

Political reactions to the trial.

Although the amendment to the LStup was approved by a large majority of the political world, there was no lack of doubts and misgivings about it.

The central parties were critical of this decision.

Peter Hegglin of the Swiss People’s Party (PPD/ZG) pointed out that in his view cannabis is even more harmful to health than smoking, and rather than promoting initiatives related to its use, it would be more appropriate to focus energy on deterring its use, especially among young people in schools.

Werner Salzmann of the SVP/BE expressed concern about possible future legalization, while pointing out that solving the phenomenon of cannabis use is very complicated, since according to the figures in Switzerland, although consumption is illegal, (but CBD Buds are still considered legal) one third of adolescents say they have tried it at least once and the number of regular users is around 200 000.

The widespread use of cannabis for recreational purposes is one of the factors that paved the way for the legislative reform behind the pilot trial, since in the opinion of Johanna Gapany (FDP/FR) ignoring these numbers would mean not admitting that the prohibitionist line does not guarantee satisfactory results and letting the black market exploit this trend.

Charles Juillard (PPD/JU) dispelled these doubts when he said that the initiative’s promoters were not seeking to necessarily open the door to such an extreme measure as liberalization, but to monitor a widespread social phenomenon and assess possible future scenarios based on scientific results.

In two words, the promoters’ slogan is: “Let’s study the phenomenon, wait for the results, then we’ll see”.

Read also: CBD cannabis: can we bring legal weed on the plane?

Given the ten-year duration of the experimental process, it is to be expected that there will be plenty of discussion about possible emulation by other countries, as the Swiss government’s initiative is one that approaches the phenomenon of weed consumption in a constructive and intelligent manner.

The Just bob blog will pay particular attention to the development of this path, and we will be ready to keep our readers up to date with any news.