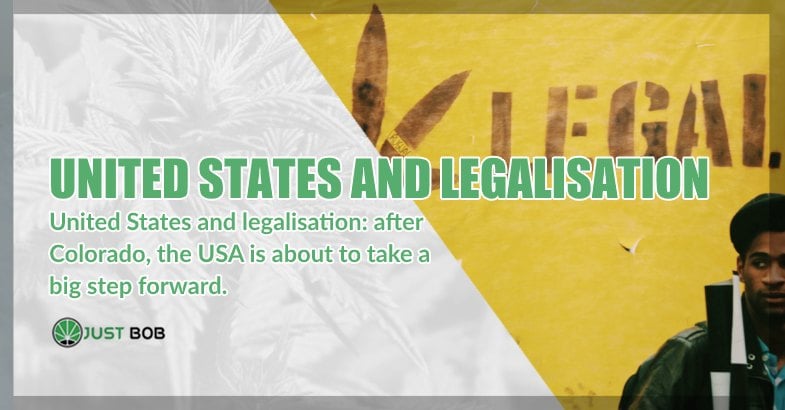 UNITED STATES AND LEGALISATION: AFTER COLORADO, THE USA IS ABOUT TO TAKE A BIG STEP FORWARD.

CBD flowers in Colorado is proof that a state, despite the very long period of prohibition in the USA, can change course and allow not only the cultivation but also the sale of marijuana flowers.

Many reasons have led this country to legalise marijuana. Firstly, the desire to suppress the illegal trade in cannabis and secondly, to create a massive loss to the black market for its sale.

Not only that Colorado, with the legalisation, has seen (rightly) huge economic gains thanks to the many online and physical stores dedicated to marijuana – and related items such as bong, grinder, etc.. – but they decided go big!

So, how did marijuana become legal in the State of Colorado?

CBD cannabis in Colorado – phase 1: the legalisation of medical cannabis.

A few years ago, precisely in a period from 2000 to about 2014, an awareness campaign was started in Colorado, mainly dedicated to medical marijuana. The Department of Public Health thoroughly investigated the benefits of medical cannabis due to the effects of THC and CBD on the human organism.

Marijuana has pain-relieving, euphoric, antiemetic and anti-inflammatory effects. It is also known to increase appetite significantly. The fields of application, based on therapeutic cannabis are therefore numerous (its legalisation in Europe has already taken place, and cannabis-based medicines can be used for the treatment of multiple sclerosis, chemo- and radiotherapy related pain, food problems and much more).

Back to the US, in 2000, 54% of Colorado voters approved an important amendment that amended the State Constitution, namely amendment 20 dedicated to the medical use of marijuana underwritten medical consent.

According to this amendment, patients are allowed to possess up to 2 ounces (just over 50 g) of the medical CBD flower and even grow up to 6 cannabis plants. In Colorado, people who can use medical marijuana must have one (or more) of the following diseases:

Of course, there are restrictions on the use of medical CBD cannabis: you cannot use this product in public places or in places where you can be seen. Also, you cannot drive a vehicle after you have taken it, and you must stay away from schools and hospitals.

That’s not all: people who use medical marijuana cannot request it from a pharmacy but can seek it from a recognised therapist or a state-affiliated company, usually called a dispensary.

In 2012, 12 years after the legalisation of medical marijuana, Amendment 64 entered into force. This amendment allows people aged 21 years and over to grow up to 6 cannabis plants privately on their own (only half can be ripening).

Some rules: the growing room must be locked; it is also possible to own up to an ounce of cannabis flowers and give the same amount to other people (also resident in Colorado) aged 21 years or older.

Besides, from 2016, Colorado visitors can also own up to an ounce of marijuana flowers – great news for tourism to flourish even more!

Of course, you cannot drive after taking cannabis, but you can consume it in public.

As you can well imagine, even recreational marijuana users can buy it only and exclusively from authorised dispensaries.

What about the economic advantages? Know that only in 2014, the first year of legality, the CBD weed trade in Colorado (including medical marijuana) reached a considerable turnover of $700 million.

But there is further extremely recent news about the legalisation of cannabis throughout the United States.

Read also: American states where marijuana is legal: here’s where you can smoke cannabis in the USA

Although CBD buds is legal for medicinal and recreational use in several American states, including Colorado, this product has remained federally banned. But, in mid-November 2019, the Justice Committee of the US House of Representatives accepted a law regarding the cannabis legalisation in the USA.

It is a huge step forward for the country that first banned all use of cannabis! And above all, it is the first time in history that the US Congress has issued a pro-marijuana vote.

In the coming months, the text of the cannabis bill will go to court. If they pass it, it will end up in the Senate. One last consent and marijuana will be legalised not only in Colorado, Alaska and other individual states but also at the federal level!