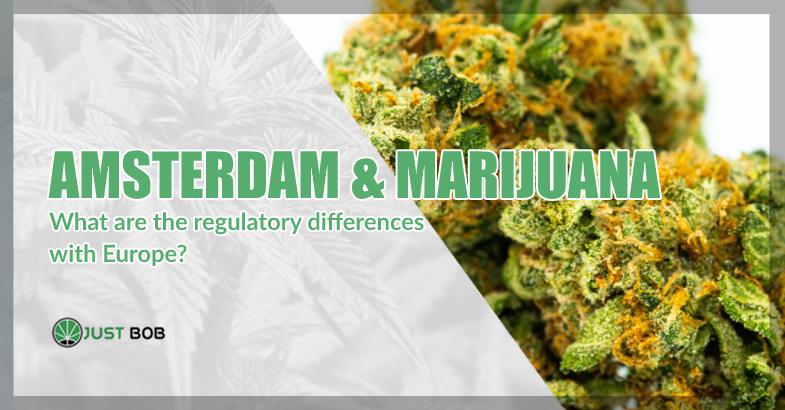 EVERYTHING YOU NEED TO KNOW ABOUT MARIJUANA IN AMSTERDAM.

It is known throughout the world that Amsterdam is rather ‘liberal’ when it comes to legal CBD cannabis. In this city in the Netherlands, you can go into the famous coffee shops and buy soft drugs, including high-THC cannabis, hashish and, in some cases, hallucinogenic mushrooms.

There are also lots of marijuana items, such as lollipops, sweets, candies and more. Amsterdam is now the ultimate destination for cannabis lovers, precisely because buying it (in the right places) and smoking it is legal.

It is very different from the rest of Europe where there is still a debate about the legality of the CBD Bud, with a THC of less than 1% and high percentages of CBD: the non-psychotropic cannabinoid.

Amsterdam and laws on “soft drugs” such as marijuana

In Amsterdam, you can not only find CBD weed, but also buy and use high THC content weed, which they define as legal grass, but which in our country is entirely illegal.

Dutch drug policy is based on the fact that each individual can decide on matters relating to his or her health. It is no coincidence that terminally ill people in the Netherlands can also have recourse to the much-discussed euthanasia.

Another fundamental point on which Dutch law is based is that hiding and trying to prevent social phenomena at all costs is not helpful.

On the contrary: it aggravates them and leads to the adoption of illegal practices (such as drug trafficking and cutting marijuana and other drugs with chemicals that are toxic to humans). But this does not mean that all drugs are legal in the Netherlands.

The distinction between soft and hard drugs in the Netherlands

In the Netherlands (as in all other countries), the sale, distribution and use of hard and potentially lethal drugs such as LSD, heroin, cocaine, etc. are prohibited.

On the other hand, the personal use of so-called ‘light drugs’, such as marijuana, related products (hashish, CBD oil, etc.) and hallucinogenic mushrooms, is permitted. Thus, those who smoke cannabis, even in public, do not risk any problems with the law.

You will be surprised to learn that, instead, the marijuana trade is still prohibited under the Opium Act of 1919, to which cannabis was also added in 1950 … But although it is theoretically illegal, the sale of cannabis is widely tolerated under certain conditions. These include the fact that you can only sell cannabis in cafés and limited quantities (5 grams per person). Even shop warehouses have particular limits on the amounts they can hold, precisely no more than 500 grams at any one time.

Of course, the sale to minors and their entry into coffee shops is forbidden. Moreover, no advertising for points of sale and products may be advertised. But where does the high THC content grass (of course, we are not talking about CBD Buds) for sale in coffee shops come from? Can cannabis Sativa be grown in the Netherlands?

Can you grow cannabis in Amsterdam?

In Amsterdam, a maximum of 5 seedlings can be grown per person for therapeutic or recreational purposes, but no more. Industrial cultivation is prohibited: Amsterdam’s coffees are supposed to be supplied by countries where marijuana can be grown and exported, such as individual American states.

Thus, large-scale cultivation and processing of high THC cannabis are against the law, but the penalties are less severe than in many other states, including our own. We don’t know whether coffee shops are also supplied with illegal crops or not, but we certainly can’t rule it out.

Read more: CBD and CBDA: what are the differences?

It seems that the Netherlands, especially the city of Amsterdam, although it is in Europe, is well ahead of all other European states. You can grow marijuana safely at home for personal use (and not just CBD flowers, but grass with a high THC level), you can buy it ready and processed in cafés, and there is a wide tolerance in its use. Although cannabis is officially illegal, both tourists and locals can use it.

Of course, there are limits to be respected. For example, a maximum of 5 seedlings can be grown at home. This rule of 5 also applies to the grams of marijuana that can be bought in cafés. The rest of Europe should come to this point as well, finally abandoning prohibition, but for the time being, these prospects are far from over.

However, you can still buy CBD buds in our CBD online shop. So, take a look at all our CBD flower strains and choose the ones you prefer, even in the kits!