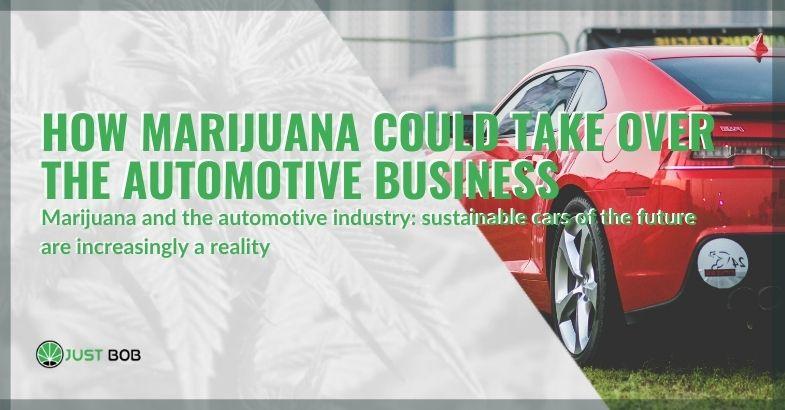 MARIJUANA AND THE AUTOMOTIVE INDUSTRY: SUSTAINABLE CARS OF THE FUTURE ARE INCREASINGLY A REALITY

Although hemp plants have always been demonised because of the presence of THC (the psychotropic substance that is illegal in many parts of the world), today, with the cultivation of legal hemp with a high CBD content, things are changing considerably.

Not only is hemp Sativa being used on a large scale to make many cosmetic and pharmaceutical products, but its fibres are also being re-evaluated.

Cannabis has always been used in the textile industry, but what if we told you that it could be used to make a car?

Yes, we are talking about environmentally friendly cars that are good for the environment and could even offer higher performance.

All of this is a reality and here we explain why marijuana and automotive could soon become the main trend.

The fact that hemp fibres are very strong has been known since ancient times. It is no coincidence that even the much-loved jeans are made from hemp fibres.

Recently, hemp plastic has also become popular, with its unique characteristics in terms of both strength and lightness, but who would have thought that CBD cannabis would also be used to make most of the external components of a car?

As early as 1941, Henry Ford designed the first ‘Hemp Car‘, a car almost entirely made of hemp-derived materials, but although it was an innovative project, it failed to take off.

The reasons for this have always been that, at the time marijuana was considered ‘dangerous’, so cultivation was frowned upon, and a boom in petroleum-based products coincided: cannabis was a hindrance to the projects of a very powerful niche.

But apparently, that was not all.

According to Nathan Armstrong, a well-known Canadian vehicle engineer, the reason was also related to factors of strength, speed of production and consequently price.

For many years, attempts have been made in vain to create a hemp-based material that could really compete with fibreglass in terms of price and performance, but there was a missing piece that has finally been identified and will probably change the future of cars.

Perhaps cars that run on hemp ethanol instead of petrol.

Let’s now find out what this ‘missing piece’ consists of.

Read also: Hemp & Green Building: these are the news that detonates the potential of hemp in the building sector

The right recipe to definitively integrate hemp into the automotive sector

Despite the limitations of hemp-based materials for the automotive sector, some have believed in them and have not given up.

A San Diego-based car manufacturer – Aptera Motors – approached Natham Armstrong to once again use hemp to make a solar-powered vehicle.

What they came up with was quite surprising.

According to engineer Armstrong, a material made from hemp has now been created that surpasses fibreglass and other materials most commonly used in the automotive sector in terms of strength, price, and performance.

To make it short, it’s a real revolution compared to the past.

What has changed is the way the fibre is used.

Whereas in the past hemp fibres were used in ‘free’ form or in the form of an absorbent mat, the solution has been found in woven fibres.

What does it change?

In previous tests, the hemp fibres literally ended up sucking up all the resin in the compound, making it necessary to use a larger quantity, and resin is precisely the most expensive material.

In the case of using hemp in the form of a “mat”, on the other hand, the pieces obtained were irregular and full of protuberances.

With woven hemp, all the above-mentioned problems have been solved.

The fact that the fibres are woven very tightly means that absorption problems are eliminated, and the resulting material is smooth and particularly strong, more so than fibreglass.

Why are marijuana and automotive the future?

It is great news for the environment that a material made from hemp fibres has been developed and has been revealed stronger and better performing than the usual materials used to make cars.

But more specifically, what makes CBD weed the right plant for the automotive sector?

The reasons are many, but can be summarised as follows:

Let’s start with the first point.

Growing one acre of legal hemp can produce a much larger quantity of biomass than growing other fibres (up to 30,000 pounds per acre).

Hemp also produces a much stronger and harder fibre than other plants, especially when grown in cold and windy areas such as Canada (Armstrong’s country).

As far as the price of the material is concerned, it is still high at the moment because the process is going like this: the hemp is shipped from Canada to Europe (where there is a company that makes this particular woven hemp) and then from Europe, the woven fibres are sent back.

The goal of the San Diego-based car manufacturer in collaboration with Armstrong is to be able to make the investment that would allow to process the fibres directly on-site, lowering prices by up to half or even a quarter compared to glass fibre.

This possibility seems to be achievable within five years, and if it is, hemp will certainly take over.

Ultra-strong hemp fibres and biodegradable resin are the future of the automotive industry.

Read also: Can hemp be a fuel? Here’s how things stand

As you can see, cannabis is not only CBD oil, pre rolled joint and textiles, but the more you study this plant, the more you will discover that it is an excellent resource for many different sectors.

After this study, we invite you to visit our online store Justbob, where you can purchase many collectable products.

Light cannabis and its derivatives are waiting for you in our CBD online shop.