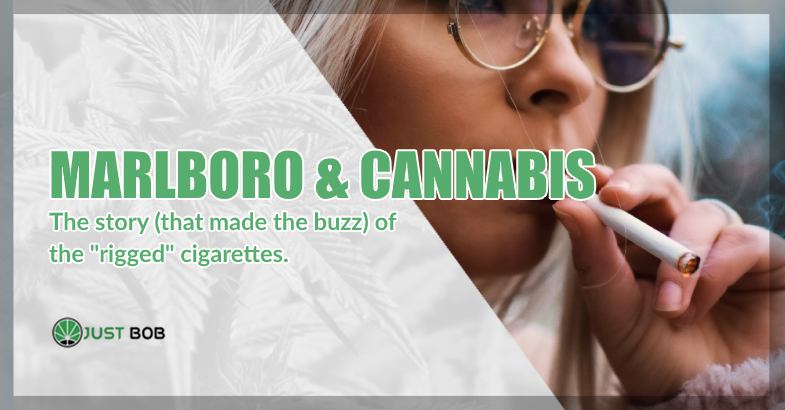 HAVE YOU EVER HEARD OF MARLBORO MARIJUANA CIGARETTES? HERE IS WHAT HAPPENED.

In 2014, news of the marriage between Marlboro and cannabis spread online, thanks to the launch of an innovative product on the market: the marijuana cigarette (and we are not talking about CBD cannabis).

This news quickly spread around the web, and many smokers and cannabis enthusiasts saw a new opportunity opening up.

Too bad it was a hoax!

The cannabis-infused Marlboro cigarettes, which would have been officially unveiled at the 2015 Superbowl, never existed.

But how is it possible that fake news of this magnitude could have circulated so quickly? We will immediately explain the mystery to you.

What is real behind the hoax of Marlboro cannabis-infused cigarettes?

Let’s start at the beginning: the big tobacco lobbies (including Philip Morris) have suffered a drastic drop in sales over the years. To give you a better understanding of the scale of these figures, we report below the figures we are talking about:

In 5 years only, the sales have fallen by 14%, an astronomical amount of units. For this reason, during these years, the large tobacco industries simultaneously started to penetrate the medical cannabis market, investing in this new market.

Altria Group, the parent company of which Philip Morris is also part, decided to invest 1.8 billion dollars in Cronos, a medical marijuana company based in Toronto, acquiring 45%. Unlike in the United States, where cannabis is still illegal at the federal level (except for some states, including Colorado), cannabis was already legalised nationally in Canada.

Beware, we have reached the point where our big fake news has taken root!

Marlboro Marijuana: how did this gigantic fake news make it around the world?

We have reached the point where Aldria acquires 45% of the shares of Cronos, a medical cannabis research and development company. On 14 January 2014, this news is picked up by the site Abril Uno, known for its ironic content, which publishes an article (deliberately false) in which it refers to the announcement by Philip Morris of the launch on the market of the Marlboro M product, in which the “m” stands for marijuana.

The scale of the hoax, combined with the reality of Aldria’s investment in the world of hemp, made the communication plausible to the public and word of mouth did the rest. Within a few hours, the hoax became a reality, and many more articles are still circulating today as if the news of the Marlboro cannabis cigarettes were real.

It shows how powerful the spoken word can be and how the mass media influences people’s conception of any subject. It is precisely for this reason that JustBob is running an awareness campaign on CBD weed with the hope that in the Switzerland the design of this product, which has no doping effect, will change in a positive direction.

Why does CBD cannabis demonisation remind us so much of the false news of Marlboro infused cannabis?

As you probably know, there is a battle at the top in Europe to get clear legislation on CBD weed. Italian law – which governs Just Bob company – still has no regulations on this newly manufactured product, which is evolving commercially on the razor’s edge due to a regulatory vacuum.

The fundamental problem specifically concerns the preconceived ideas that many people have about legal weeed, and the blame lies solely with misinformation. Indeed, CBD flower has a THC content of less than 1%, a negligible value that does not provide any doping effectiveness to the plant material in question.

Moreover, the CBD buds are rich in CBD, the non-psychoactive cannabinoid of cannabis which, in addition to bringing many benefits to our body, attenuates the effect of THC, totally cancelling out its effects.

Therefore, the demonisation of light weed as a doping product does not exist at all, and the war that CBD manufacturers and shops like JustBob are fighting uses the weapon of information.

Read also: Industrial use of legal cannabis: what does it mean?

Buy your CBD cannabis from JustBob.

Our CBD online shop offers a wide range of top-quality legal weed. In our showcase, you will find the best high CBD buds a on the market for all tastes, from Italian production and 100% organic.

If you have a huge desire to bring home the best CBD flowers, CBD hash and CBD oil, have a look at the Just Bob catalogue right now!

PS: we would like to remind you that the CBD weed-based products offered for sale on our website are intended for technical and not recreational use.