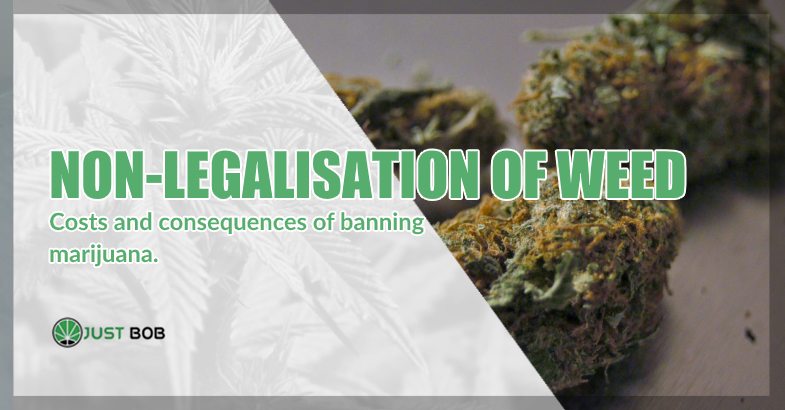 COSTS AND CONSEQUENCES OF BANNING MARIJUANA.

The cannabis legalisation has been one of the most debated subjects in recent years, both in Switzerland (particularly with the advent of CBD weed) and worldwide. Among the most common reasons put forward by those who do not want to legalise cannabis is the damage caused by marijuana, or rather the THC it contains.

In reality, this motivation no longer makes sense to exist thanks to the spread of CBD cannabis, with THC levels below 1%.

Moreover, the real damage of marijuana is the damage that its prohibition gives it.

Today, we are talking about the consequences of cannabis prohibition, far greater than the side effects of the same product.

If cannabis cultivation were legal, as a substance with potential side effects (such as anxiety and depression) but therapeutic to say the least, the sale of this product would in no way be necessary.

Instead, prohibition has fuelled the black market, to the extent that marijuana is one of the most popular drugs – although it is the only legal one. An example should be taken from the Netherlands which, although it has not yet moved to eliminate cannabis from the illegal substances, widely tolerates cultivation for personal use and the sale (in cafés and limited quantities) of this product.

Marijuana tourism, typical of Amsterdam, brings very high incomes to the city and the country in general. By deferring bureaucratic issues that would imply the adoption of a law in favour of marijuana, the state earns from its sale to tourists. And citizens who wish to use marijuana for their use can grow up to 5 plants at a time, whether for recreational or therapeutic purposes.

This behaviour also protects people from the use of cannabis and substances harmful to humans.

Read also: CBD Cannabis and appetite: 3 reasons to consider using it if you’re not hungry

2) The marijuana sale following its ban, exposes people who use it to high health risks.

It is infamous that cannabis sellers and other drugs, cut drugs with toxic chemicals to increase the weight of the marijuana flowers and enhance their effects. Samples of black-market marijuana analysed in approved laboratories often contain hairspray, pesticides, rat poison and many other substances that are very harmful to the health of those who use them.

Suppose all people over 18 could grow CBD buds and high THC cannabis at home. In that case, they could benefit from the effects of the herb without risking exposure to the toxic substances with which dealers mix marijuana.

The damage, in this case, is to people’s health. Not to mention that the authorities, if cannabis were legalised, could focus more on trafficking hard drugs.

3) The illegality of cannabis distracts the attention of the authorities when they could concentrate on the fight against hard drugs.

There are many ganja dealers, not least because of the low cost of the product, which allows even the smallest traffickers to operate without significant problems or investment. If high THC and low THC cannabis were legalised, trafficking in marijuana would be considerably reduced.

The authorities, instead of committing themselves to fight small-scale drug traffickers (which no longer exist), could do more to combat trafficking in heavy drugs such as cocaine, LSD, heroin and many others.

While marijuana can sometimes cause anxiety and paranoia, hard drugs have much more significant side effects, including direct death from overdose. We talk about a big problem because drug addicts often tend to neglect themselves and use all the money available to buy doses.

The cannabis legalisation, particularly CBD cannabis, would therefore bring many benefits to our state and its population. Furthermore, the ban on legal herbal substances is absurd.

Read also: In Colorado, marijuana is legal, and soon maybe, it will be legalised throughout the United States.

Why does it make no sense to ban the use of CBD cannabis?

The answer is simple: because it is practically THC-free, and the high percentages of CBD it contains modify the CB1 receptors, making them unable to interact with the low percentages of tetrahydrocannabinol (less than 1%).

And the psychotropic cannabinoid contained in marijuana is THC: so why should a product containing less than 0% be illegal?

CBD (cannabidiol) is the non-psychotropic and highly beneficial active ingredient in CBD flowers. The strains in our CBD online shop are rich in CBD (it can even reach 24%) and low in THC: this is certified by the analyses carried out in the laboratory of the University of Milan.

What are you waiting for? Buy the best legal weed online at JustBob and tell us what you think! We’re waiting for you!