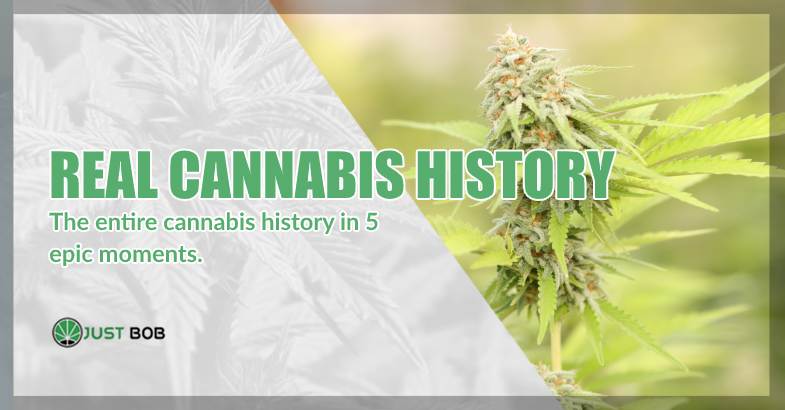 THE ENTIRE CANNABIS HISTORY IS DIVIDED INTO 5 EPIC PHASES AND MOMENTS.

If you’re wondering what the real cannabis history, you’ve come to the right place to find the answer! The cannabis plant is an ancient product, used by man in the most varied ways: from ceremonies to sacred rituals, from the creation of ropes, fuels to recreational and therapeutic use. In recent years, CBD cannabis was born, a product containing less than 1% THC and high percentages of CBD, the non-psychotropic cannabinoid.

The effects of CBD are very beneficial, although they are still under study because marijuana has been widely demonized over the centuries.

But how did it get to this point? What is the cannabis history that you would like to know? Follow us through this story and you will find out everything, absolutely everything, about it.

History of Cannabis – The agricultural revolution, classical antiquity and the post-classical era.

The first signs of the use of cannabis (product very different from modern CBD flowers) date back to 8000 BC in the East. The place and date come from the discovery of ancient pottery fragments (on which the signs of hemp strings were printed) from modern China and Taiwan. Instead, the first discoveries of hemp fibre fabrics date back to Mesopotamia, or present-day Iraq and the surrounding regions.

From 2000 to 800 BC, the use of cannabis also spread to Japan, Korea and the Indian subcontinent. Atharvaveda, a collection of religious texts from ancient India, consecrates hemp as a “gods’ plant”, which is one of the sacred plants of ancient India.

Around 1200 BC, Sativa hemp also spread in ancient Egypt: this is demonstrated by the discovery of a canvas made of hemp fibres found inside the tomb of Pharaoh Alchanaten. Later, between 800 and 200 BC, hemp and its derivatives spread throughout Asia, but also in North Africa and the eastern Mediterranean regions. The Scythians spread cannabis in modern Germany, while from 200 BC, Greek historians noted the benefits of the plant against inflammation, oedema and earache.

From 200 B.C. to 500 A.D., Chinese artisans produced hemp and mulberry paper for the first time, so much so that scribes in the Mediterranean regions and Japan began to use hemp paper exclusively to bring back all their texts.

From 500 to 100 AD, the use of hemp spread throughout Eurasia, and the Moorish invasions of 700 brought the plant to the Iberian Peninsula. Thus, began the production of ropes and cords in Russia, Greece, Spain and even in the British Isles.

Hemp at the beginning of the modern era and during colonialism.

Did you know that in 1492 the ropes and sails of Christopher Columbus’ caravels (the Nina, the Pinta and the Santa Maria) were made entirely of hemp fibres? It’s no coincidence that they took the name of “canvas”, which derives from the Latin cannabis and means “made of hemp“.

This plant had an indispensable role in antiquity, especially for the manufacture of fabrics, ropes and sails, so much so that in 1533, King Henry VIII of England ordered English farmers to grow cannabis to support the Royal Navy or the British Navy. They were fined if they violated these provisions.

From 1600, the first hemp plantations were established in Jamestown, the first British colony in the Americas, where the plants were used to produce fuel for lamps, heavy-duty clothing, ship armaments and much more.

By the late 1700s, all American colonies peasants were required by law to produce hemp as the main crop in their fields.

The American nation was born, and hemp played a fundamental role in it.

In 1776, the Declaration of Independence and the Constitution of the United States were drafted. Guess what material was used? Of course, hemp paper! The first versions of the American flag, the Old Glory, were also made of hemp fibres (probably so that they could withstand the erosion of brackish air very well).

In the 19th century, hemp was established as a form of currency in America, and the first cities with names like Hempfield and Hempstead (as you probably know, hemp means hemp) began to emerge in the territory. The hemp industry in the U.S. has been growing and has developed technological innovations such as the hemp husker.

By 1850, approximately 8,500 hemp plantations were registered in America. It is scary to think that this fantastic product was about to be banned from America and then from the whole world …

The cannabis fall in the 20th century.

In 1916, a statistic from the United States Department of Agriculture indicated that cannabis plants produce 4 times more pulp than conventional wood.

But suddenly, in 1937, came the Marijuana Tax Act, the law that gave way to a ban on the production, trade and use of all varieties of cannabis. This law was primarily based on the psychotropic effects of marijuana, and the taxes it imposed made growing hemp on any scale prohibitively expensive.

The collapse began. We have seen the last harvest of industrial hemp in America took place in 1957. Fortunately, the growing demand for hemp over the following decades led the U.S. government to abolish restrictions on the import of hemp / cannabis seeds and oil for food use only.

In 2004, the Ninth U.S. Court of Appeals sided with the Hemp Industries Association against the Drug Enforcement Administration. The ruling authorized the permanent import and sale of hemp for food and skincare products.

Victory in 2007: Two farmers in North Dakota were allowed to grow cannabis. These are the first permits after a 50-year ban: imagine the joy of the growers!

Gradually, industrial and research hemp cultivation was allowed throughout the United States, while retail trade of hemp products was growing until it reached a reasonable $688 million in 2016.

While many U.S. states have liberalized the cultivation of cannabis also for personal and therapeutic purposes (such as California, Colorado and many other states) and earn millions and millions of dollars a year, here in Switzerland, government officials continue to clash fight over the legalisation of CBD weed, almost THC-free and rich in CBD, the beneficial and non-psychotropic cannabinoid.

Take a look at our CBD online shop!

Let’s hope that we won’t have to wait centuries to conform to American nations but also European ones like Spain!