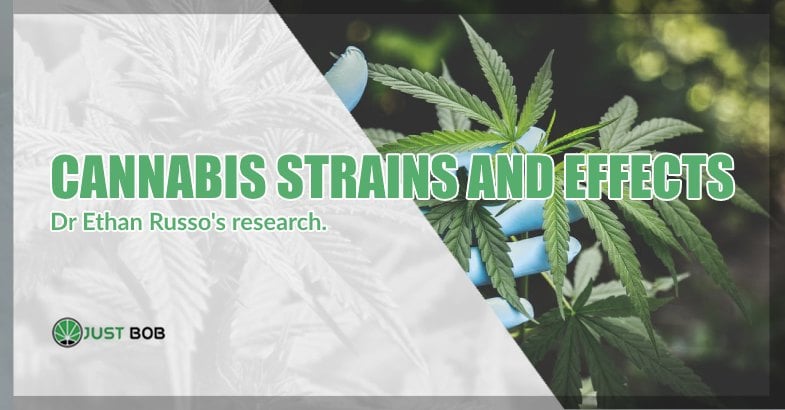 If you use conventional cannabis or CBD cannabis, you will have experienced different effects with different strains. Both in their psychoactivity and their beneficial and therapeutic properties. The scientific community believes that this difference is mainly due to THC. Still, some researchers have highlighted the importance of other constituents of marijuana, including terpenoids and other cannabinoids other than THC, such as CBD.

Today, we want to focus in particular on the research of Dr Ethan Russo, a registered neurologist who serves as a senior medical advisor to GW Pharmaceuticals. He is also a former president of the International Association of Cannabinoid Medicines (IACM) and is currently the president of the Cannabinoid Research Society.

Such research shows that THC is not the only component of cannabis that determines the different effects for each strain. Terpenoids and other cannabinoids such as CBD also play an essential role in this respect.

Cannabis and cannabinoids: not just THC

There are more than 400 different cannabis components. About 60 belong to the cannabinoid family, responsible for the effects of cannabis and its modulators. It is the marijuana flower that produces natural cannabinoids from its glandular trichomes, microscopic filaments that produce sticky resin: large quantities of resin (and therefore trichomes) indicate high cannabinoid levels.

In addition to THC, there is another cannabinoid that has become quite famous in recent years (especially with the CBD cannabis advent CBD buds and legal hash based on CBD crystals). It is cannabidiol, known as CBD.

Read also: Industrial use of legal cannabis: what does it mean?

Cannabis varieties have different amounts of THC and CBD (as well as all the other less well-known cannabinoids), and it could be the different ratio between the two components that determine the variation in effects depending on the strain of marijuana.

It is no coincidence that CBD can modulate the psychoactivity and side reactions to THC. Besides, the CBD effects are very beneficial (e.g. muscle relaxation, stress relief, pain and inflammation relief and much more).

Other recently discovered cannabinoids, namely THCP and CBDP, may also be responsible for the variation in the effects of cannabis per strain (e.g. Gorilla Glue Weed certainly does not have the same effects as Super Lemon Haze). But further research is needed to confirm this hypothesis effectively.

Other potent cannabinoids under investigation, but less well known than those already mentioned. These are the following:

In the introduction, we also talked about terpenoids as a variable related to the different effects of cannabis varieties. But what are these substances?

Cannabis terpenoids: what are they, and why are they important?

Terpenoids, also known as cannabis terpenes, are also produced by the glandular trichomes of the marijuana and CBD flower. These natural compounds are responsible for the aromas of different cannabis varieties and appear to be important modulators of effects (McPartland and Russo, 2001; Russo 2011).

Terpenes confer their beneficial and therapeutic effects on different cannabis strains (both CBD Weed and THC-rich cannabis). They are often able to reduce or even cancel out the side effects of THC.

Here are the most remarkable cannabis terpenoids:

Fun fact: terpenoids are not only present in cannabis but in many other plants and even some animals. In nature, terpenes give living things characteristic aromas that can ward off predators and at the same time, attract pollinators or, in the case of animals, creatures of the opposite sex.

Terpenoids are therefore indispensable for the reproduction of plants and animals. At the same time, we enjoy them (or feel disgusted because of the aroma of the terpene in question!) because of their smell.

Dr Ethan Russo, thanks the research on cannabis conducted for many years now, gives us an explanation of the effects of marijuana which can vary according to the strain. These variations seem to be due to the ability of cannabinoids and terpenoids – contained in the trichomes of CBD cannabis flowers – to modulate the effects of THC.

Besides, these components also have their beneficial abilities, which themselves affect the effects of CBD flowers and THC-rich cannabis.

Studies on this plant are still ongoing, but they are providing us with more and more answers to our doubts about how our bodies react to cannabis use.