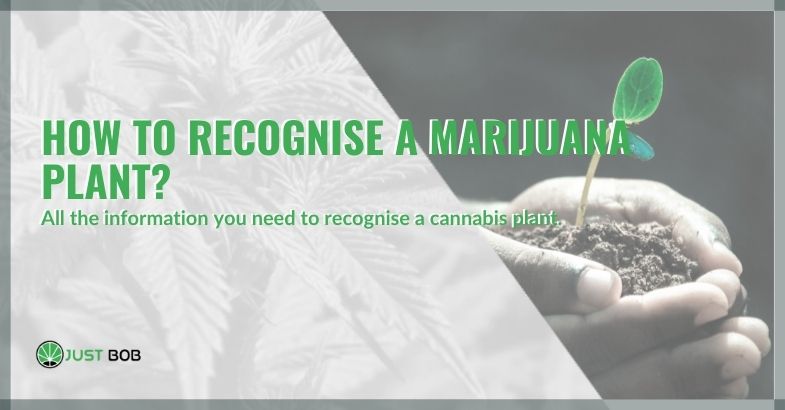 ALL THE INFORMATION YOU NEED TO RECOGNISE A CANNABIS PLANT.

Your curiosity for CBD cannabis knows no bounds, and now you want to know how to recognise a marijuana plant?

Once you know the main characteristics, it is very easy to distinguish cannabis from other plants, but there are other features to discover, such as genus, seeds and much more.

Are you ready to learn everything, absolutely everything about what a cannabis plant looks like? Then go straight to the next paragraph!

What is a marijuana plant made of? Here you will learn how to recognise one!

The cannabis plant has a tall, robust stem that can support the weight of the many branches, leaves and of course flowers or seeds, depending on the genus of the plant.

The stem produces many branches, which give the plant different conformations depending on the stem :

As you can imagine, Indica cannabis has a much denser leaf and branch structure than Sativa and Ruderalis.

Speaking of leaves: the branches have many fan-shaped leaves growing on them. Also, when they look like this, it depends on which strain of marijuana they belong to :

Now, even with the help of the photos, you certainly have an idea of the morphology of the cannabis plant, and you would be able to recognise it even if you see it in a field among many other plants.

But perhaps you would like to satisfy another curiosity: How do you recognise a male or female marijuana plant?

When and how can you determine whether the marijuana plant is male or female?

The first step in identifying the male/female of legal cannabis, and therefore in distinguishing females from males, is to wait for the plants to develop. Marijuana plants show their sex only a few weeks after germination.

Let’s imagine that the growing period is childhood and that flowering is the phase when marijuana is adult. The sex of the seedlings identification can begin during the transition from adolescence to the last stage of growth.

Learn how to recognise a female marijuana plant.

The main characteristic that makes us understand that a CBD weed plant is female is the appearance of white pistils after (about) the sixth week of life. However, the birth of the pistils can often take longer.

These small white “hairs” grow mainly between the central stem and the branches, in the area known as the armpit. The pistils are nothing more than flowers that begin to germinate and form.

Being able to see the pistils is an excellent event for cannabis growers and CBD oil producers because only female marijuana plants have resin-rich flowers and therefore, cannabinoids like CBD.

Male cannabis plants, on the other hand, produce pockets of pollen which then pollinate the flowers of the female plants. The result is the development of cannabis seeds. Some growers are happy … others are disappointed because it means that the flowering has been compromised.

Wondering how you can tell a male seed from a female seed? Unfortunately, this is not possible, so growers who want to produce CBD flowers buy feminised seeds.

Feminised cannabis seeds are hormonally modified seeds, which have a 99% chance of producing a female plant. The probability of a male plant being born from a feminised seed is minimal.

Identifying a legal male cannabis plant: a little tip to establish it before it pollutes the rest of your female plants.

It is very easy to identify a male hemp plant, as it develops small “balls” immediately after the end of the growing season. These balls are actually pockets of pollen which, once fully grown, can pollinate female plants in full bloom.

As we have already told you, when a legal female cannabis plant is pollinated, it stops flowering and goes into seed production.

Not surprisingly, many growers sort the male plants immediately to avoid the risk of affecting the whole crop.

You now know how to recognise a legal (or illegal, because they look alike) CBD Flower or legal marijuana plant, and how to distinguish between female and male cannabis.

We hope we have satisfied your curiosity: If you liked this article, share it on social networks!

And if you are curious about how cannabis flowers are made, buy the best legal cannabis strains now from JustBob, our CBD online shop.

We look forward to seeing you there!