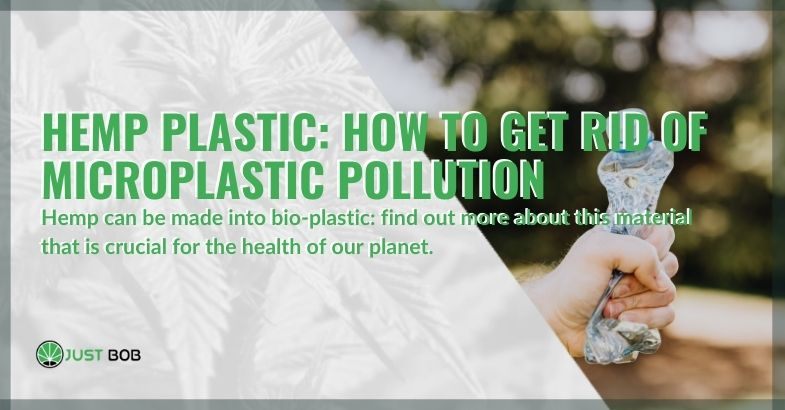 HEMP CAN BE MADE INTO BIO-PLASTIC: FIND OUT MORE ABOUT THIS MATERIAL THAT IS CRUCIAL FOR THE HEALTH OF OUR PLANET.

Nowadays, in addition to the many studies carried out on the molecules and substances contained in the hemp and CBD cannabis plants, there has also been more focus on the characteristics of its fibres and in particular on the waste substances from industrial processing.

This is how bioplastics were rediscovered, an ecological material with a thousand resources which, if it receives the attention it deserves, could have a huge impact on solving environmental pollution by micro-plastics.

Although still little known, hemp plastic has become a reality, and it seems to have interesting characteristics, to say the least, that are far better than those of the “traditional” plastic we all know.

But that’s not all, it seems that hemp bioplastic is also more advantageous than the vegetable plastics that have become popular not long ago, both from the price and resistance to heat sources points of view (which makes it safe even in the kitchen).

Here we explain how this product is produced, what its incredible positive characteristics are and how it can affect the health of our planet.

Hemp plastic: how it is produced and when the idea was born

As you can see, nothing is thrown away from cannabis and CBD Flower plants.

As well as producing CBD products and other derivatives, it is also possible to produce textiles, to build products and even hemp-based plastics.

But how did this idea come out?

Who thought of hemp plastic and how to produce it?

On a national level, a Sicilian company certainly stands out, taking its cue from Harry Ford, who in 1941 built the first prototype car, made almost entirely of plastic hemp.

The young people from Catania in the start-up company Kanesis, with an eye to the future, first looked for an ecological solution for a production of non-polluting plastic materials in industrial waste of vegetable origin and found the answer in cannabis fibres.

This led to the creation of hemp bioplastic, a composite material that is essentially made by processing the plant’s fibres with other biodegradable raw materials (such as corn starch).

The resulting product is decidedly high-performance:

Despite the incredible discovery, at the time the dissemination and development of this technique was blocked both because of economic issues (oil was booming) and because the hemp plant was demonised and its cultivation was frowned upon.

Fortunately, things have improved since then and it is hoped that from now on, hemp plastic will really spread like wildfire to replace petroleum-based plastic.

Hemp plastic: characteristics and areas of use (to get rid of microplastics)

Hemp plastic, made from the fibres of this plant, is not only environmentally friendly but also has many other positive characteristics.

Here are some of them:

To make it short, as you can see, this is a product with a thousand properties, decidedly versatile and which can be used to make many objects for the most varied contexts.

But more precisely, what can be made with this material obtained from the waste of marijuana and CBD Weed?

The characteristics of hemp bioplastic are particularly suitable for the manufacture of details in the automotive sector, in particular thanks to its strength, elasticity and lightness (it allows less fuel to be consumed).

In addition to producing rear-view mirrors and other such parts, it seems that hemp plastic can even be used to replace steel sheet metal in cars.

Apart from the automotive sector, producing plastic from hemp can also be useful for making agricultural equipment, everyday objects, electronic components, toys and much more…

Another area in which this material will certainly have a large role to play is in 3D printing, due to its versatility and costs that are half as low as those of better-known bioplastics such as PLA.

In short, the fact that bioplastics made from hemp can be used in all of these sectors suggests that the idea of a future based on eco-sustainability is increasingly feasible.

Read also: Marijuana Games: here are the best ones.

According to a study carried out by WEF (World Economic Forum), it seems that in less than 10 years’ time there will be one ton of plastic in our oceans for every three tons of fish, and that 150 tons of this substance has already been detected.

In various forms, microplastics have already entered the food chain of animals and humans, and the effects on the body do not bode well.

Hemp plastics can be a good solution for limiting global pollution. It does not contain toxic substances such as polylactic acid, PBS and PHA, is biodegradable and does not endanger the fauna of our planet.

In short, bioplastics made from hemp have all the credentials to be preferred to chemical plastics and can make a decisive difference in restoring, at least in part, an increasingly endangered natural environment.

After this insight into the potential of hemp, we now invite you to visit our Justbob store, where you can buy CBD oil, inflorescences and pre rolled joint to enrich your collection.

We look forward to seeing you in our CBD online shop!