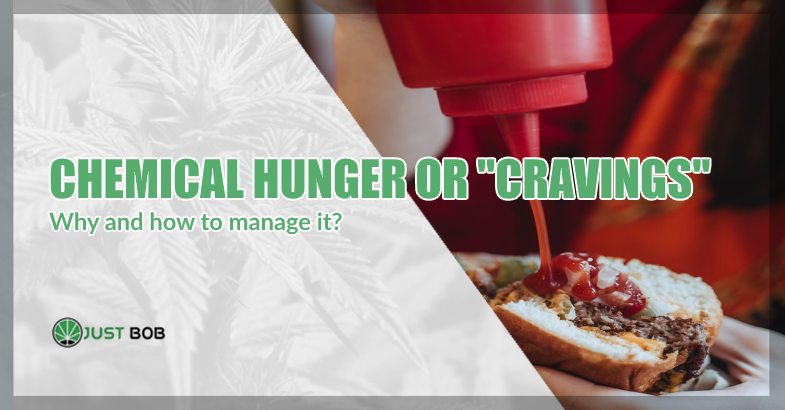 WHAT IS “CHEMICAL HUNGER”, WHY DOES IT OCCUR AFTER CONSUMING CANNABIS AND WHAT CAN YOU EAT TO SOOTHE IT?

If you like CBD cannabis, or THC-rich cannabis, you will be familiar with cravings, a typical side effect of its use. But why are we so hungry after using marijuana? So hungry that you have to empty the fridge or empty the pantry to be able to soothe it!

The scientific community has not yet fully understood all the mechanisms that make cannabis users hungry, but some of them are well known, and we will talk about them in the course of this study. We will therefore tell you what the cravings are, why they occur after smoking pre rolled joint or ingesting marijuana, and what you can do to soothe them without eating all the food you keep at home!

What is a craving and why does it come after using cannabis?

Cravings are a reaction to our body that usually occurs after using cannabis. It manifests itself as a sudden, uncontrollable feeling of hunger, an urgent need to eat, even on a full stomach.

It usually appears after 30 minutes, or within 2 hours at the most, after using cannabis. What seems to trigger is the THC interaction, one of the leading natural cannabinoids, with our endocannabinoid system, particularly with the CB1 and CB2 receptors.

Initially, it was thought that only the so-called chemical THC caused hunger. Still, several studies (mainly laboratory studies) have shown that even CBD can increase the feeling of hunger in people who take it, although in a very different way from THC.

Read also: Marijuana Silver Haze: all you need to know

THC and cravings after using marijuana

A European neuroscientists team from the University of Bordeaux has discovered that THC stimulates olfactory receptors in the bulb of the brain of laboratory mice. This interaction increases the ability to smell food and causes the mice to eat more.

Indeed, the endocannabinoid receptors in our brain are fundamental for the emotions’ control. But they also act for memory, for modulating the perception of pain but also for regulating the appetite sensation. And, as we mentioned earlier, THC interacts with our endocannabinoid system.

When studying THC and cravings, the researchers first took exposed laboratory mice and gave THC to some of them. They then exposed the mice to the scents of almond and banana oils to test their sensitivity to odours.

The mice sniffed the irems very carefully, but those that had not taken THC showed a lack of interest because of their olfactory dependence. On the other hand, mice given THC by the scientists continued to smell because their sense was altered (and made more sensitive) by the cannabinoid.

Besides, the mice that took tetrahydrocannabinol ate much more than those that didn’t, showing an increase in the sensation of appetite.

The researchers then genetically modified some of the mice by excluding all cannabinoid receptors from their olfactory bulbs. These animals, after taking THC, quickly became accustomed to the smell of food and their sense of appetite was almost the same as the mice that had not taken it assumed the cannabinoid.

CBD and cravings? Not really: better to talk about the anti-nausea effect.

Studies concerning cannabidiol (CBD) and CBD flowers are becoming more and more frequent. Some of them have shown that this cannabinoid does not cause cravings because it interacts with our endocannabinoid system differently from THC.

However, among the CBD effects, which are very beneficial to our health, one is particularly essential for those suffering from eating disorders and for those undergoing therapy that causes nausea and lack of appetite (e.g. chemo and HIV drugs). It is the antiemetic effect, also known as anti-nausea or anti-vomiting, which has been widely demonstrated in laboratories.

Already in 2012, the British Journal of Pharmacology published a study on the positive CBD effects on the relief of nausea and the regulation of appetite. In this study, Cannabinol had opposite effects on the feeding patterns of rats. The researchers examined the response of laboratory and laboratory mice to the induction of nausea and subsequent CBD intake.

The scientists administered various substances capable of inducing nausea and vomiting, such as lithium chloride and nicotine to the animals. Mice and guinea pigs who were subsequently given CBD showed a marked reduction in the symptoms caused by these substances.

The researchers then injected the animals with a substance capable of blocking serotonin receptors in the nuclei of the dorsal raphe, or areas of the brain involved in the regulation of nausea and vomiting. This action inhibits the CBD Buds effects. It is showing that the antiemetic effect of cannabidiol depends on the interaction of the cannabinoid with serotonin receptors.

THC seems to be the main reason to snack because of its ability to refine the sense of smell. To satisfy this sudden feeling of hunger, we recommend eating nutritious but healthy foods such as dried fruit mixes (you can always keep a bag with you!), fresh fruit and low-fat yoghurt.

Alternatively, you can gain weight at any time: cannabis speeds up your metabolism but certainly doesn’t work miracles!

CBD weed also seems to have a substantial effect on our sense of appetite, but in a very different way from THC. Cannabidiol, a non-psychotropic phytocannabinoid, interacts with serotonin receptors, calming nausea and vomiting and promoting a healthy feeling of hunger.